How Dogs May Help Humans with Depression, PTSD, Anxiety, and Stress 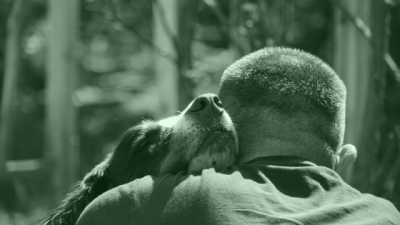 Animal-assisted therapy (AAT)—also referred to as animal-assisted intervention (AAI)—uses animals as a part of treatment for physical and psychological illnesses. Types of animals used for AAT include birds, cats, dogs, horses, and pigs. Incorporating animal interactions into treatment regimens has been practiced for decades, but more recent studies have provided scientific support, indicating that AAT is associated with reduced stress and anxiety, improved mental function and focus, and improved behavior and social skills.

Many animals may prove beneficial to human mental health. Due to the research available, this article focuses on the impact of dogs in AAT (sometimes called Canine Assisted Intervention, or CAI). This growing field of research indicates that canine companionship benefits human well-being in multiple ways. In her book Inside of a Dog, Alexandra Horowitz writes:

Simply petting a dog can reduce an overactive sympathetic nervous system within minutes: a racing heart, high blood pressure, the sweats. Levels of endorphins (hormones that make us feel good) and oxytocin and prolactin (those hormones involved in social attachment) go up when we’re with dogs. Cortisol (stress hormone) levels go down. There is good reason to believe that living with a dog provides the social support which correlates with reduced risk for various diseases, from cardiovascular disease to diabetes to pneumonia, and better rate of recovery from those diseases we do get.

It is easy enough to make the connection that, if a person likes dogs, interacting with a dog would likely increase happiness. But the same could be argued for any enjoyable activity: if a person likes cars, then driving a car might improve their happiness. So what is it that makes dogs, in particular, a source of mental health improvement?

Physical Benefits: Dogs Get Us Moving

Physical exercise has been shown to improve mental health. This mind-body connection is executed in a few ways:

Owning a dog entails physical work. From walking and playing with the dog to routine care such as feeding, bathing, and grooming, living with a dog is a responsibility that encourages—and often requires—us to get moving. The difference between physical activity for health benefits versus physical activity for the sake of a dog is that the focus is shifted from obligation (“I have to get moving to be healthy”) to one of fun (“I should take my dog for a walk”).

In general, dogs have a reputation for friendliness, affection, loyalty, and unconditional love. Humans often feel safe and accepted by dogs in a way that may not come naturally when interacting with other humans. However, simply interacting with a dog may open a person up to socializing not only with animals but also to connecting with other humans. In a study on the effects that walking a dog had on physical and mental health, Carri Westgarth, et al. reported that dog-walking “encouraged social contact with people,” with dogs serving as an ice-breaker for conversation.

Many benefits of canine companionship may stem from a psychological response: the positive interaction with a dog creates a positive feeling. However, research indicates that there is also a physiological response when touching or even seeing a dog. This response may include:

What Sorts of People Benefit from Canine Companionship?

Canine companionship has been associated with improved mental health in:

The wide range of ages and treatment options indicate the potential of using dogs as a pivotal tool for various therapies.

A twelve-week trial conducted by Dr. Sabrina Schuck indicates that interaction with dogs shows improvement of symptoms in children with attention-deficit/hyperactivity disorder (ADHD). Children aged 7-9, who had previously been diagnosed with ADHD, were split into two groups:

Both groups showed improvement with the help of traditional therapy methods, but “the group assisted by therapy dogs fared significantly better with improved attention and social skills at only eight weeks and demonstrated fewer behavioral problems. No significant group differences, however, were reported for hyperactivity and impulsivity.” Schuck noted that the influence of dogs in expediting positive results was promising, particularly as an alternative treatment method for parents who were hesitant to use medications on their children.

In addition to improving focus and social skills in children with ADHD, therapy dogs have been shown to help children struggling with anxiety or stress. Researchers at Yale University joined forces with The Good Dog Foundation—a New York-based charitable organization that provides therapy dogs to medical and community facilities—to examine the potential impact a dog may have on children with stress. The study looked at preteen children (ages 10-12) because this age group is particularly prone to “perceived stigma, discomfort talking about mental health problems, and wanting to cope independently”—all of which hinder traditional therapy’s effectiveness.  A press release from The Good Dog Foundation reported the results:

A study by Dr. Anne Gadomski, et al. determined that the presence of a pet in the home decreased the likelihood of childhood anxiety. Unlike previous studies that had focused on children with preexisting mental or behavioral conditions, this study investigated the role of using dogs for preventive therapy. “If exposure to pet dogs during childhood is inversely related to mental health problems, positive child-dog interactions could prevent the evolution of these problems into full-fledged disorders during adolescence or later life,” the researchers stated.

The effectiveness of canine interaction as a form of preventive therapy was measured against the Screen for Child Anxiety and Related Disorders (SCARED-5) rating. The results showed that children with dogs had a lower score compared with children without dogs. The researchers believed that the difference lies in the hormonal effects—the simultaneous reduction of cortisol and increase of oxytocin—and concluded that further research may reveal the specific cause and effects of AAT, along with long-term outcomes on patient anxiety.

At Excelsior Youth Center in Spokane, WA, Lindsay Ellsworth investigated the impact of canine companionship on teenage boys in drug and alcohol treatment—many of whom were also being treated for ADHD, depression, or post-traumatic stress disorder. Using shelter dogs from the local humane society, participants in the program reported increased positive thoughts and feelings, focus, and calm. Ellsworth hypothesizes the brain produces the “feel-good” chemical dopamine in anticipation of interacting with the dogs, and the “social companionship with the dogs may also stimulate opioid release.”

Using dogs to stimulate these natural reactions “could help restore the normal function of these critical chemical messengers after the brains’ chemistry has been altered through drug use,” suggests Ellsworth. The youth center’s staff is also optimistic about the program’s potential, with executive director Robert Faltermeyer noting that caring for a dog required the teens to focus on specific goals, which may inspire them to make positive changes in their own lives.

Post-traumatic stress disorder is a mental health condition resulting from experiencing or witnessing a traumatic event; while commonly associated with military combat, trauma may result from a variety of experiences such as natural disasters, life-threatening accidents, or sexual assault. In the United States, 7-8% of the population will struggle with PTSD in their lifetimes. In military veterans, the percentage is significantly higher: depending on the service era, 11-15% of veterans struggle with PTSD in a given year.

Two studies from Purdue University’s College of Veterinary Medicine evaluated whether veterans’ PTSD symptoms were alleviated by service dogs. These studies were carried out in cooperation with K9s for Warriors, a nonprofit organization that provides service dogs to veterans with traumatic brain injuries, sexual trauma, or PTSD to help the transition back to civilian life. The first study looked at the psychological effect: veterans with a service dog reported fewer PTSD symptoms and scored better on coping skills, psychological health, and other measures of well-being

The second study delved into the physiological reasons behind these benefits, comparing levels of cortisol (a hormone associated with stress) in veterans who had already received a service dog against veterans who were still on a wait-list. Not only did the results show that veterans with service dogs measured better than those on the wait-list, but they also revealed that veterans with a service dog experienced “less sleep disturbance, lower levels of anxiety and anger, and less alcohol abuse than those on the wait-list.” The researchers noted that a lot more study is warranted to determine the relationship between canine companionship and PTSD symptoms.

The positive effects of canine companionship—decreased depression and anxiety, coupled with increased positive feelings, calmness, and ability to focus—lend themselves to being used for optimizing health and well-being seniors. Furthermore, the stimuli and positive interaction with a dog—or even “dog-related” interactions such as watching puppy videos—have been beneficial to some patients struggling with dementia or Alzheimer’s disease. For many seniors, however, owning a dog offers the simple benefit of staving off loneliness or boredom.

As discussed at the beginning of the article, caring for a dog requires owners to be active physically. It prompts people to get moving despite “excuses” of poor weather, tiredness, illness, or even chronic conditions. Dog ownership encourages seniors to continue an active lifestyle (which has physical and mental benefits) and has been seen to promote cognitive health.

The benefits of keeping active with a dog are more complex than simply serving as a form of exercise. In their study on the effects of dog walking, Westgarth et al. concluded that the main benefit owners derived from dog walking was psychological rather than physical. Specifically, the stress relief experienced while walking a dog was different from stress relief from walking in general: the researchers noted that “it was clear that walking for most dog owners was enhanced by the specific presence of dogs and the desire for the ‘fun’ they bring.” Not only that, but the data indicated that this fun was often vicarious—that is, the reason dog owners considered the walk “fun” was that they perceived that the dog was enjoying the activity.

As Westgarth et al. discovered, dog owners’ happiness relies on the perception that their dog was happy: “although dog owners described the walks as ‘for the dog,’ their responses showed that a dog’s needs aligned with their own. Their happiness was contingent on believing that the dog was feeling happiness and enjoyment.” Yet as the other studies indicate, the positive effects of canine companionship aren’t simply a placebo of sorts, but rather cause real physical changes in humans’ brain chemistry that promote feelings of happiness, calm, focus, and well-being.