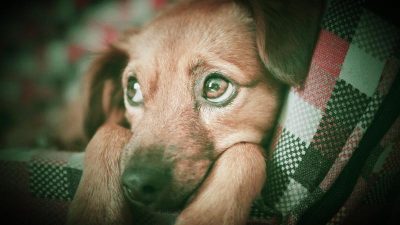 Research indicates that dogs have the capacity to experience emotions similar to humans, and can develop a variety of psychological conditions, including phobias such as canine storm anxiety. Sometimes all it takes is one bad experience during a thunderstorm to instill debilitating anxiety for years to come; in fact, the severity of this fear may increase as time goes on. Is there a way to relieve our dogs’ symptoms of storm anxiety and make them feel secure?

The Root of Storm Anxiety

Fear can be a good thing when it’s an instinct of self-preservation. During a storm, for instance, fear can prompt a dog to seek shelter. When a dog is safe inside and protected by their human companions, however, this fear may become irrational. In Pets on the Couch, Dr. Nicholas Dodman writes that the physiological responses to anxiety are the similar in humans and animals:

“The amygdala, the brain’s Grand Central Terminal for both fear and anxiety, lights up on PET imaging scans in anxious and fearful animals and people. The long-term memory center, the hippocampus, is also involved in propagating the response. Connections between the amygdala, hippocampus, and hypothalamus facilitate release of stress hormones, like epinephrine and cortisol. Epinephrine increases heart rate, blood pressure, and the caliber of the respiratory passages…. In addition, endorphins are released in reaction to fear. So in both people and nonhuman animals, the same neurotransmitters are released in brain regions that deal with anxiety and similar behaviors result.” – pg 157

A number of possible factors may contribute to a dog developing a phobia of storms. One obvious reason is that dogs have better hearing than humans, and so are more sensitive to loud noises like thunder. Some dogs are sensitive to all noises—including fireworks, gunshots, and even coffee grinders—while others are only fearful of certain sounds, and seemingly unaffected by others. Lightning, rain, wind, and other storm conditions may also contribute to a negative association with all storms.

As social creatures, dogs often take their cues from others around them. A frightening experience during a storm—or being with a dog or person who was terrified of storms—can imprint this phobia at a young age. Dogs that fear thunderstorms often struggle with one or more other forms of anxiety, such as separation anxiety, social anxiety, and canine noise aversion. According to Mychelle Blake, MSW, CDBC, studies have “found that breed, age, sex and acquisition of the dog can increase the likelihood” of a dog experiencing storm anxiety, explaining, “Female dogs and neutered males are more likely to be thunder phobic, as well was dogs that were rehomed.”

Dogs cannot express their fears in words, and so must communicate in body language that might be difficult for their owners to translate. Possibly because their superior hearing allows them to hear thunder rumbling further away, or they detect other changes in barometric pressure or scents, dogs may begin to react to a storm long before it occurs. Because these changes are indiscernible to humans, it may seem to us that our dogs are simply acting strangely, even misbehaving.

Some dog owners may try to discipline their pets’ behavior because they don’t recognize the signs of anxiety, which only reinforces the negative association with storms. If we can learn to distinguish the symptoms of canine anxiety, we can not only avoid unnecessary scolding, but we can also take early action to relieve their stress before the storm hits. Symptoms of canine storm anxiety include:

Common triggers of these symptoms vary from dog to dog, and may change in individual animals as time goes on and their anxiety grows. Some dogs may react fearfully to darkened skies or light rain showers just because they’ve come to associate them with harsher storm conditions. Other triggers include:

There is no cure for storm anxiety or noise aversion, but there are several methods to help a dog cope with their fear. While the habit of panicking at loud noises is an easy one to form, reversing this habit often requires a lot of time, consistency, and patience. To avoid severe reactions to storms, animal behaviorists recommend using a combination of behavior modification and fear desensitization before storm season even begins.

Behavior modification is a method discouraging bad habits while rewarding good ones, and often is a lengthy process. Experts agree that the time to train dogs not to panic during storms is before storm season even begins. While there is some debate whether you should comfort a whining, fearful dog—some experts argue that this provides positive reinforcement on the behavior you’re trying to discourage—the universal consensus is to use positive reinforcement such as treats, toys, favorite beds, games, and verbal praise when a dog is calm.

Desensitization gradually reduces a dog’s reaction to sounds of storms or other loud noises. Recordings of storms or fireworks are played at a low volume and slowly increased while the dog is given positive reinforcement in the form of play, toys, or treats. The drawback to desensitization is it allows for control of only one aspect of storms—loud noises—and therefore cannot be used to acclimate a dog to the other negative stimuli such as static electricity or changes in barometric pressure.

Both behavior modification and desensitization change the dog’s perspective of storms from one of fear to one of comfort. Because they have received praise, treats, and toys, the dog associates stormy conditions with positive rather than negative things. To reinforce this training, calm behavior should continue to be rewarded as bad weather sets in.

Can Cats Have Storm Anxiety?

With their acute sense of hearing, it makes sense that dogs would be afraid of loud noises such as those made by fireworks or storms. But feline ears are more sensitive than both humans and dogs, so why isn’t storm anxiety at least as common in cats?

The simple answer may be that some cats do suffer from storm anxiety, but they employ different methods to cope with it. According to Jan Hoffman, “Animal behavior experts say cats often seem more self-reliant and understated than dogs, so when they hide under beds during storms, owners may not read that response as unusual.”

Because phobic symptoms can be subtle in cats, it’s important for their human companions to pay close attention for any signs of anxiety during storms, fireworks, or other loud noises. If you find your cat exhibiting symptoms of storm anxiety, the recommended approach and treatment to alleviate their fear is the same as with dogs: through behavior modification training or medication prescribed by a veterinarian.

Inner anxieties are not cured simply by training a dog not to display outward panic. During a storm is when all prior training must be put into action to decrease your dog’s stress. Offering a dog a chew toy or engaging in a playtime activity invites them to focus on something aside from their fear. Another way to distract from the loud noises is to put on music or white noise (either white noise recordings, or by turning on an air conditioner or fan) just loud enough to drown out the thunder, but not so loud that the distraction becomes overwhelming itself.

Many dogs instinctually attempt to hide during a storm, so experts suggest creating a “safe place,” located as far from loud noises as possible, away from windows to avoid sudden flashes of lightning, and preferably without carpeting to minimize static electricity. When first introducing a safe place, Dr. Dodman says owners should go with their dogs to reinforce the idea that it is a secure environment. Praise, treats, and other forms of positive reinforcement should be used, especially as the dog begins to go to the safe place on their own without prompting.

Bathrooms are a favorite retreat for dogs suffering from static shocks, but other good options for safe places include basements, closets, or covered crates. Equip the space with water, food, and comforting objects such as favorite toys or bedding. Make sure to leave an exit from that safe place; shutting a dog inside their safe place may cause them to feel trapped, causing them to react with even more panic.

One of the more popular suggestions for relieving canine storm anxiety is the use of specialized vests, jackets, or capes that are available from various commercial sources. The idea is that “swaddling” the dog with something tightly fitted around the torso will give a sense of security. Reports are mixed as to whether this form of treatment works, or whether it merely has a placebo effect. Success may rely on dogs having the association of security with wearing the vest; like other forms of behavior modification, it’s important to have your dog wear the vest during calm times long before storm season arrives.

Medication is another option. Sedatives may make the dog sleep through the storm, but do not address the underlying problem of anxiety. On the other hand, antidepressants not only relieve anxiety but may help the dog focus on the other behavioral modification training during a storm.

Blake relates that “pet guardians can be uncomfortable with the thought of using medication for anxiety on their dog, but thunderstorm phobia can be a medical emergency if it’s severe enough. Even in its milder forms, it’s still a very unpleasant experience for the dog. Medication can make him more comfortable.” Some alternatives to prescription drugs include natural remedies such as pheromone diffusers, aromatherapy, massage therapy, and melatonin. Whether considering prescription or alternative remedies, always consult a veterinarian before employing any treatment, as they can give advice on how best to serve your dog’s individual needs.

Whether your dog has been struggling with a phobia of storms for years, or you’re looking to prevent a puppy from developing it in the first place, dealing with canine storm anxiety takes a lot of preparation, perseverance, and patience. Just as dogs cannot express the reason for their fears, it’s hard for us humans to explain that we’re trying to help. The best way to communicate our empathy is by doing all we can—through behavior modification, desensitization, medications, or a combination of one or more of these treatments—to help our dogs feel safe instead of scared.