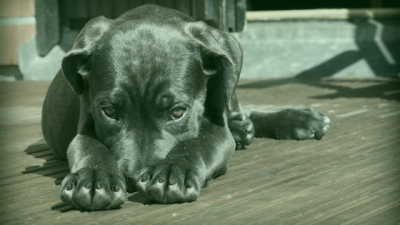 Is your pet interested in everything you put in your mouth? Does he or she stare at you with a longing gaze as you eat your meals and snacks? One of the things we love most about our pets is their curious nature. However, many common foods and supplements that are non-toxic or even healthy for humans can be poisonous to our pets. Dogs are particularly at risk of being poisoned by accident. Dogs, unlike cats, are not very discriminate in their food choices.

Xylitol is a naturally occurring sugar alcohol and is used as a sweetener in many products. It has the added benefit of preventing tooth decay and is found in many gums, mints, and tooth pastes. Xylitol can also be used by people with diabetes because it does not interfere with blood glucose control and it is found in many food products designed for diabetics.

Dogs are extremely sensitive to xylitol and even eating a small amount can cause a rapid decline in blood sugar and damage to liver cells. Vomiting, diarrhea, and lethargy are early symptoms potentially followed by seizures and collapse. Early intervention by a veterinarian can help restore blood sugar and prevent further damage. Unfortunately, the old standby, activated charcoal, does not work to counteract xylitol.

This group of foods include onion, garlic, leek, and chives. Early signs of poisoning include vomiting, diarrhea, loss of appetite, and depression. Anemia may develop and can be identified by noting pale tissue in the mouth, rapid heart rate, and rapid breathing. Cats and dogs can both be affected. Activated charcoal can help after vomiting stops. Severe anemia may require a blood transfusion.

Outside of the expected alcoholic beverages, alcohol toxicity can occur from rotting apples, and uncooked bread and pizza doughs. The onset of symptoms occurs quickly and includes depression, lethargy, low body temperatures, sedation, and even coma. Veterinarians can use dialysis in severe cases. The herb yohimbine has been used to counter the nervous system sedation.

Grapes, including dried raisins, sultanas, and currants can cause kidney failure in some animals. Vomiting and diarrhea can occur and undigested grape fragments are apparent. If kidney failure occurs, the animal becomes unable to urinate. Induced vomiting and aggressive activated charcoal use are treatments veterinarians may use. Intravenous fluid support might also be needed.

Within twelve hours of ingestion of macadamia nuts, dogs have developed hind leg weakness, depression, vomiting, high temperatures, and stiffness. Inducing vomiting can help and no deaths have occurred.

Hops are used in beer making and the accessibility of beer to companion animals has increased with home brewing. Some animal species are more susceptible than others and develop malignant hyperthermia – a severely increased body temperature. Other symptoms are rapid heart rate, anxiety, panting, abdominal pain, and brown colored urine. Induced vomiting is used along with ice baths and even cold intravenous fluids to lower the body temperature.

Caffeine and Other Alkaloids

These are found in coffee, teas, chocolate, guarana (diet supplements), human medications for asthma and other human medications, and garden mulch made from cacao beans. Chocolate seems to be the worst offender, especially during holidays. Early symptoms include restlessness, anxiety, and urine incontinence. Later symptoms may include heart arrhythmias and respiratory failure. Treatment includes induced vomiting and aggressive use of activated charcoal.

Pet owners need to be aware of the food items that could have a deadly effect on their pets. Be proactive by making sure these items are safely out of reach, to prevent your pet from becoming poisoned by accident in the first place. Additionally, being alert to symptoms of poisoning can ensure professional help from a veterinarian is sought early when management can be successful.