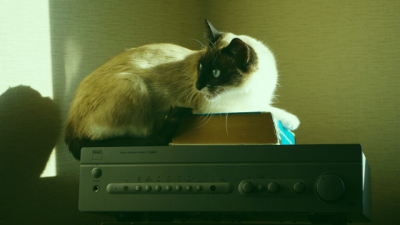 As technology pervades daily life, science has struggled to keep up with understanding the possible side effects on health. Light pollution disrupts natural sleep cycles; attention disorders are often associated with internet usage; and noise pollution causes many diseases in humans according to the Environmental Pollution Centers, including hearing loss or impairment, cardiovascular dysfunctions, and psychological issues. As researchers have learned about the effects of technology, they have also begun to address concerns that animals are also affected by “electronic pollution.”

Brian Cooley summarizes what many pets may endure:

Few of us would put up with a TV that emits an annoying whine or a light bulb that flickers, but for our pets, that may be the world around them.

Their senses are tuned differently than our own and may detect a cacophony of noise and strobe effects that we don’t, particularly as we fill our homes with technology.

Fortunately, many of these hazards can be minimized or avoided if we recognize how animals’ senses are different from ours—particularly the senses of hearing and sight.

Scientists measure sound according to decibels and Hertz. Decibels (dB) describe the intensity or volume of sounds—that is, how loud or soft sounds are. Hertz (Hz) describe the frequency (i.e., the speed) of sound vibrations, thus referring to high or low pitch. Hearing tests on animals generally measure Hz ranges from the lowest to highest-pitched sounds.

In their book Through a Dog’s Ear, Joshua Leeds and Dr. Susan Wagner explore how dogs’ hearing differs from that of humans. Arguing that “secondhand sound is like secondhand smoke—it has a bigger effect than we’ve ever imagined,” their research focuses on alleviating canine anxiety and other health issues that may be sound-related.

Hearing range varies according to species and may be affected by age or genetics. Leeds and Wagner use humans to illustrate this variability: the average hearing range is between 20 and 20,000 Hz, but “adults may only hear half of that range, as age reduces our sensitivity to high pitches.” Likewise, the hearing range for dogs differs according to breed, so that the highest audible sound may vary from 40,000 to over 55,000 Hz.

All animals have different hearing ranges, and therefore different hearing needs. These needs are not necessarily met by technology that only takes human hearing into consideration. As Cooley points out, to dogs “what we call ‘ultrasound’ is just sound, but our gadgets aren’t designed with that in mind. Meant to appeal to human buyers, consumer electronics eliminate only the high-pitched noise that we hear.”

Rhythm also plays a role in wellbeing. This is illustrated in the old-fashioned scenario of placing a ticking clock in a puppy’s bed to imitate a mother dog’s heartbeat. Just as some rhythms—particularly ones that mimic heartbeats or breathing patterns—are soothing, others can be stimulating, even to the point of causing anxiety.

The tempo of external sounds alters the tempo of internal processes such as pulse, breathing, and even brainwaves. If slow frequencies have a calming effect, then fast frequencies may excite the nervous system. As we consider sound’s impact on pet health, Leeds and Wagner ask, “what can we extrapolate about the effect of other man-made sounds—television, radio, answering machines, cell phones, construction, car alarms, helicopters?”

Sight is dependent on how external light enters the eye and is translated into information by the brain. This is also measured according to frequency (or Hz) but is essentially a measurement of “flicker” rate—how fast the eye can process light into images.

Dogs, cats, and other animals with predatory instincts “see faster” than humans, and therefore don’t perceive light in the same way we do. For example, the same LED lights that appear constant to the human eye may seem to flicker on and off from a dog’s perspective. Dr. Stanley Coren uses television to illustrate the differences between human and canine sight:

The image on a standard television screen is updated and redrawn 60 times per second. Since this is above a human’s flicker resolution ability of 55 Hz, the image appears continuous and the gradually changing images give us the illusion that it is continuous. Because dogs can resolve flickers at 75 Hz, a TV screen probably appears to be rapidly flickering to dogs.

This difference was much more pronounced on older televisions; recent advancements in television manufacture have narrowed the gap, with picture resolution and faster flicker rates that may allow dogs to see fluid movement on-screen much as humans do.

Technology affects health in ways we still don’t fully understand. While there are definite negative impacts of sensory overload from artificial light and electronic noise, technology isn’t always a hazard to pet health. On the contrary, scientists have begun researching ways technology can be used to improve animal life.

Although many sounds can have a negative effect on health, recent studies have indicated that other sounds may promote healing. Specifically, researchers have been looking into the benefits of music therapy in dogs. These health benefits may include promoting health in emotional, cognitive, and nervous areas of the body.

Music is often associated with its power to influence emotion. Dr. Jessica Vogelsang notes that the “power of music to affect our emotional state has long been valued in human cultures across history, but only recently have we attempted to differentiate whether or not animals have similar responses to music.” Our understanding is still limited as to how animals experience emotions compared to humans, and whether emotional health is something to include when optimizing a pet’s overall wellbeing.

The extent of music’s ability to optimize cognitive and emotional health of animals may not be clear at the time being, but Leeds and Wagner have focused on the power of music to alleviate canine anxiety. Music has the potential to calm storm anxiety, separation anxiety, and other sources of stress. Not only does the rhythm of the music slow heartbeat and breathing, but music itself serves to mask other, more stressful sounds.

In a 2002 study of dogs in a rescue shelter environment, Dr. Deborah Wells et al. observed that slow classical music—as opposed to louder music with faster rhythms or even human conversation—was effective in calming anxiety. However, as Dr. Karen Becker points out in The Right Music Can Help Pets Heal, “music that promotes a healing response doesn’t have to be classical. Simple rhythms can have a profound impact on an animal’s nervous system by causing changes to heart and respiration rates, brain activity, and spinal cord activation.” Rather than a song’s tune, its volume and tempo is the operative component of music therapy.

Musicians and acoustic researchers have collaborated on recording pieces specifically attuned to dog and cat musical tastes. Dogs “prefer classical music played one octave lower and slower” than humans, whereas cats appear to favor sounds that are similar to purring or birdsong—an effect that may be achieved with stringed instruments. Much research into music therapy seems to have been centered on the health of more common pets such as dogs and cats, but this field of study extends to other animals, including horses, birds, and rodents—all of which have species-specific music available to purchase or access online.

As veterinary professionals, researchers, and pet owners begin to understand more about animals’ social needs, technology has been developed to alleviate separation anxiety while a pet is left home alone. With the advent of smart technology, certain electronics can be remotely accessed in your home. This provides us with greater control over the sensory stimuli a pet is exposed to while we’re out of the house.

It’s possible for us to remain unaware of the sounds pets hear while we’re at work: for instance, construction noise, traffic, or other animals. Radio and television can be used to mask sounds that may otherwise annoy or stress out pets while they’re home alone. This can also provide entertainment to a bored pet while you’re gone; there are even certain television channels or DVDs available with programming geared toward specific pets.

Two-way video chat allows for the possibility of curbing bad behaviors like getting into the trash, and also provides much-needed socialization. Another device that enables us to monitor a pet at home is an activity tracker, which measures energy expenditure and heart rate and therefore provides valuable information on a pet’s health.

All of these applications of technology make watching your pet easier, but Sage Singleton cautions against becoming overly dependent on gadgets in her article, Is smart technology helping or hurting your pets? While video chatting may alleviate some dogs’ separation anxiety and boredom, their perception of socializing with you depends not merely on sight, but also the other senses of touch, smell, and taste. Additionally, Singleton reminds us that tools like pet activity trackers cannot replace human interaction—making sure you exercise and play with your pets is a healthier way of strengthening your bond with them.

It may be impossible to completely shield your pet from the effects of technology while living in a modern home. However, there are many options to minimize sensory overload that can accompany the use of electronic devices:

“After twenty years studying the often subtle, yet profound physiological and psychological impact of sound upon people, we’re convinced our animals are as much at risk to sensory overwhelm as we are,” say Leeds and Wagner. Perhaps more so, considering that many animals have superior senses to humans, they may be overwhelmed more quickly and more intensely by outside stimuli. In other words, what is reasonably within our threshold of stimulation may be too much for the pets that share our homes and lives.

Researchers and developers are becoming more aware of how technology affects animals. This knowledge helps us minimize the impact of electronic devices and find ways to use them to benefit animal health. As technology progresses, the construction of future electronic devices may be able to avoid adverse effects on the health of humans and animals alike.