A Guide to Prevention and Protection for Your Pets 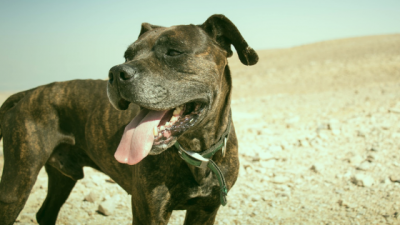 Valley fever is an infection caused by Coccidioides immitis, a fungus that grows in the southwest United States, Mexico, and parts of Central and South America. Many mammals—humans, dogs, and cats included—can be infected by inhaling airborne fungal spores. This infection can lead to debilitating pain or even death if not promptly diagnosed and properly treated.

Coccidioides immitis grows in the soil several inches below the surface. As part of its life cycle, some strands of fungal cells dry out and become brittle. If the soil around the fungus is disturbed, these fragile cells are easily broken off into the air. Once breathed in, fungal spores infect the lung tissue. There, the fungus life cycle continues as the spores develop into spherules, which grow until they burst and release hundreds of endospores that spread throughout the body.

Though valley fever is not widespread in the US, it has become epidemic in Arizona and California. The cases in Arizona account for two-thirds of the total cases nationally. The risk of infection is especially high after the rainy season when dust storms occur. Although valley fever most commonly affects dogs, cats, and humans, many other mammals can be infected, including livestock, zoo animals, and even marine mammals.

Of all of these species, dogs are the most likely to be infected. In Arizona, it is estimated that valley fever treatments cost dog owners at least $60 million a year.

Most animals are able to fight off the infection without treatment unless there is a preexisting condition or their immune system is weak. According to the Valley Fever Center for Excellence (VFCE) in Tucson, 70% of dogs who are infected are asymptomatic; they don’t get sick from the spores and are probably immune to them afterward. However, in dogs with preexisting medical conditions, puppies, older dogs, and in severe cases, this disease can be debilitating and life-threatening.

The spores have an incubation period of about three weeks before symptoms begin to appear. The primary disease starts in the lungs, developing into a dry cough, limited appetite, fever, lethargy, and depression. If the disease disseminates into other parts of the body, the bones and joints are the most commonly affected areas. Other symptoms include ocular pain, neurological problems, swollen limbs, or even lameness. While these are the general symptoms for humans and animals alike, some animals—particularly cats— may also experience open sores that do not heal.

Valley fever is considered noncontagious; the spores must be inhaled directly, so the illness cannot be passed between humans or animals. The best way to avoid contracting the disease is to avoid areas where it is prevalent. Because certain seasons are more prone to outbreaks, and because the concentration of Coccidioides varies by state—and even by county within states—it’s important to be aware of where and when infections have been recorded.

The VFCE recommends pet owners limit the amount of time dogs or cats are allowed outside. As much as possible, discourage any outdoor activity that might kick up spores from the soil, such as digging. Because prevention can only go so far, it’s important that pet owners are familiar with what symptoms to watch for in their dogs or cats. This can be particularly tricky with cats, as they tend to hide their illness until it is well advanced.

The earlier valley fever is diagnosed, the better the prognosis. If an owner suspects their pet may have valley fever, a veterinarian can confirm it through a combination of blood tests and X-rays of lungs or bones for signs of inflammation. Chest X-rays are particularly worthwhile in diagnosing cats that are suspected of having valley fever; even if they aren’t showing signs of respiratory problems, the fungus can cause lung lesions which can be fatal if not detected early enough. For dogs, the most common test is a “titer test” which measures how many antibodies the immune system is producing to fight the infection.

The treatment for valley fever is relatively successful, but part of a long process. Antifungal medications, such as fluconazole, itraconazole, and ketoconazole, are the most common medications used for treatment. Compounding pharmacies can compound these medications in a variety of different strengths and dosage forms, and can even add flavors to make the medication more palatable to pets.

Though it can take six to twelve months for a dog or cat to fully recover, they usually will begin to feel better after a few weeks. Common side effects of anti-fungal medications are nausea, vomiting, and diarrhea, as well as birth defects in fetuses if a pet is being treated for valley fever while pregnant.

Because antifungal medications can be damaging to the liver—even more so in cats than in dogs—your veterinarian may want to do periodic tests to monitor liver function. Only in rare cases, such as when the infection has spread to the nervous system, will it be necessary to continue antifungal treatments for life.

It is extremely rare for humans to be re-infected once they have recovered from valley fever, and whether reinfection is possible in animals is unknown. Once treated, however, there is a possibility of relapse in dogs and humans. Restarting medication should minimize the symptoms, although it may take some months to ensure the infection is thoroughly treated.

In addition to existing treatments, the VFCE is currently conducting research to create a vaccine to immunize pets so that airborne spores are neutralized before they can infect the lungs or other tissues, or at least minimize the severity of the symptoms. In the meantime, although valley fever threatens the health of humans and their pets, there are several measures we can take to avoid, detect, and treat this infection. Be aware of where valley fever is a risk and how it can be contracted. Watch for the symptoms in pets, especially dogs if they spend a lot of time outside. Consult a veterinarian immediately if symptoms present themselves. 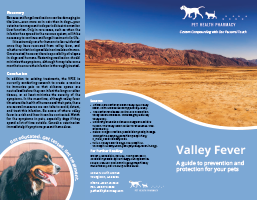